Masters of disguise – the Tawny Frogmouth 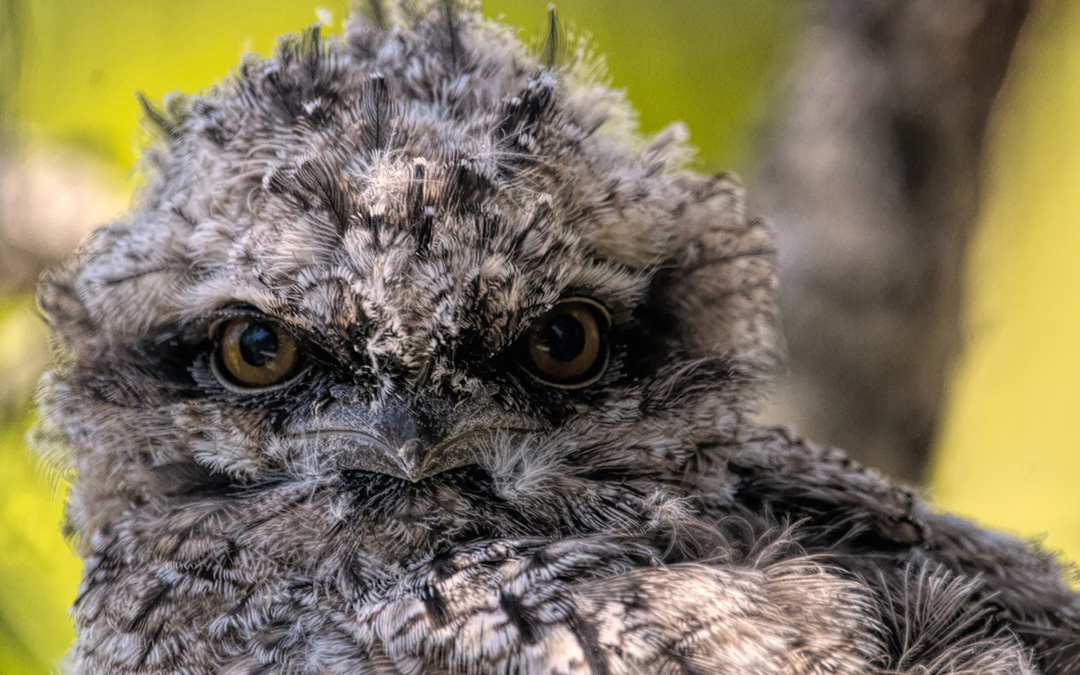 Tawny Frogmouths are one of our most popular native birds. They recently came runner-up for the second time in 3 years in the Guardian/BirdLife Bird of the Year poll. In this article is some interesting information about these much-adored birds and some advice about what to do if you find a chick on the ground.

Tawny Frogmouths (Podargus strigoides) are bulky medium-sized nocturnal (active at night) birds. They are commonly mistakenly called owls but are actually from a separate genus. Owls use their claws (talons) to catch prey, but Tawny Frogmouths use their sharp flat and hooked beak to either pounce from a low perch or catch flying prey in flight. Tawny Frogmouths eat mainly slugs, worms, snails, moths, cockroaches, beetles and other nocturnal insects. They will also eat small mammals, reptiles, frogs, microbats and small birds.

Life-long mates for each other and us

Tawny Frogmouths mate for life and spend a lot of time roosting with their mate, so you’ll often see them in pairs. There are even anecdotal stories of birds starving to death as they mourn the loss of their mate.

Tawny frogmouths are also territorial, meaning the same pair will mate season after season (they can live 14 or 15 years). This means people often become quite attached to individual birds.

Tawny Frogmouths are also very good at shared parenting. After the female lays a clutch of 2-3 eggs, the male will sit on the eggs during the day, then they’ll share the duty at night.

For the first month or so, the chicks are like baubles of white fluff. They almost look comical. Quite quickly, the white downy feathers are replaced with grey downy feathers, then mottled juvenile feathers and finally with adult-like feathers. The younger the chick the shorter their tail is. There are lots of chicks around at the moment as we are coming to the end of their main breeding season which generally runs from August to December.

Unfortunately, Tawny Frogmouths create really lousy nests, often nothing more than just a couple of sticks in a tree. That’s part of the reason, you’ll often see chicks on the ground, especially at this time of year.

One of the most seen nocturnal birds

Population numbers of Tawny Frogmouths are quite healthy and they are commonly seen in urban areas, including around Banyule, Darebin and Nillumbik. They are much more commonly seen during the day than most other owls and than other nocturnal species such as the Owlet-nightjar. While many other nocturnal birds spend the day hiding in hollows, Tawny Frogmouths perch and sleep (known as roosting) during the day on branches. They are masters of disguise. Their mottled feathers and the way they roost with their heads tilted up means they are well camouflaged as branches or bark. However, when they have chicks, their white downy feathers are often very visible.

If you do see a chick on the ground, here’s what you should do:

To build a temporary nest

If you’re lucky enough to have some nesting Tawny Frogmouths, enjoy watching them raise their clutch of chicks.