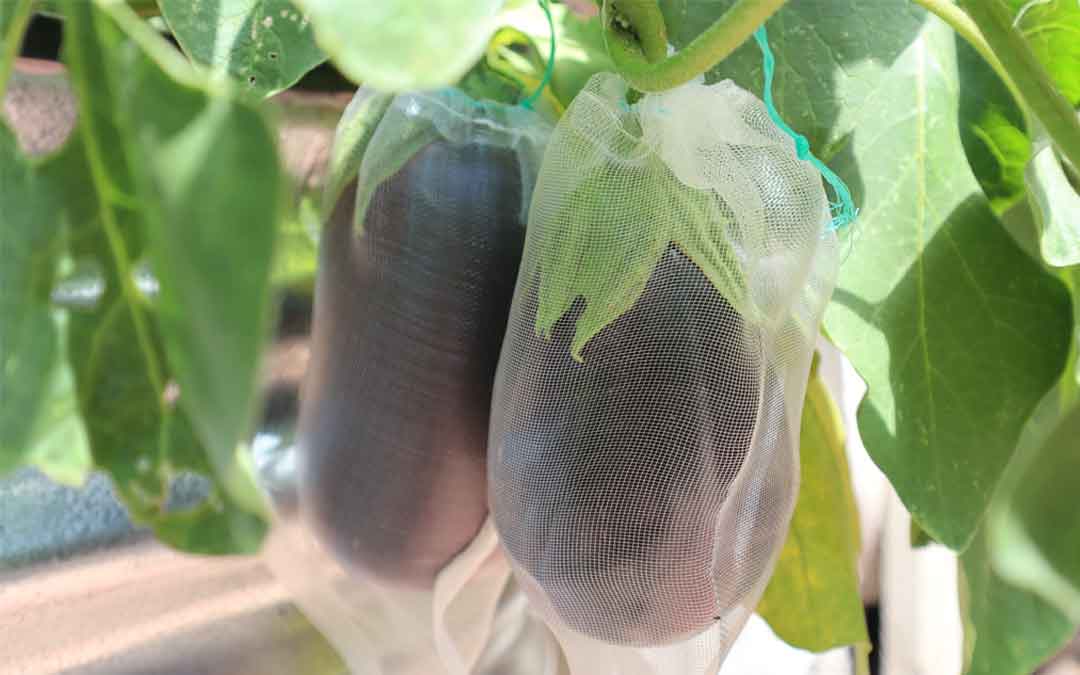 Have you ever cut open a beautiful looking eggplant only to find a winding, black track through it? This is a poo trail from an eggfruit caterpillar. It is rare to see where the caterpillar has entered, or even see the caterpillar itself, but you will be in doubt that it has been taking a wander and a munch through your fruit.

In fact, the eggfruit moth lays its eggs on the calyx (the tough sepals on top of the fruit) and when the temperature is 25C, they hatch out into larvae. The larvae then tunnel into the fruit from the top. It is only after 10-17 days when they tunnel out again, leaving a 3-4mm hole, that it is obvious the eggplant has been infested. While the larvae are on the inside, no damage is visible which is why some eggplants are sold that way. They do however deteriorate quickly once the larvae have pierced the skin and exited. Brown patches emerge causing rot around the hole.

This year and last year, we put our young, very small eggplants in net bags tied tightly around the calyx and they have been completely poo trail free. Placing the bags like this, means the moth cannot land and lay eggs on the calyx. In the past we would have used an organic bacterium marketed as Dipel but this has not been necessary. The reason we began to use net bags was to protect our fruit from Queensland Fruit Fly which can infect eggplant though rarely does. One thing we have learned this year is that we need to use much larger bags. Our fruit has grown so well that we are having to cut the bags open (we will sew them up again).

Another learning this year is not to grow a second row behind the first. We grew four plants in a wicking bed, which is ideal as eggplant thrives on water, but the two in the front which got full sun are huge and productive while the back row are small and weedy, having suffered too much shade from those in the front row. Likewise, we have four in a row in the ground and the back two were shaded by some rocket going to seed. They are okay, but much smaller than the first two in the row. At least we will have a continuous supply of eggplants as the smaller plants mature.

Ample water in the root zone is essential to produce good, sizable fruit. Plants are fed by nutrients in the soil which MUST dissolve in water, in the root zone, so that they can be transported up the stem, out to the branches and to the flowers and fruit. This happens as plants take up the water they need. Under-watering will produce hard, bitter fruit.