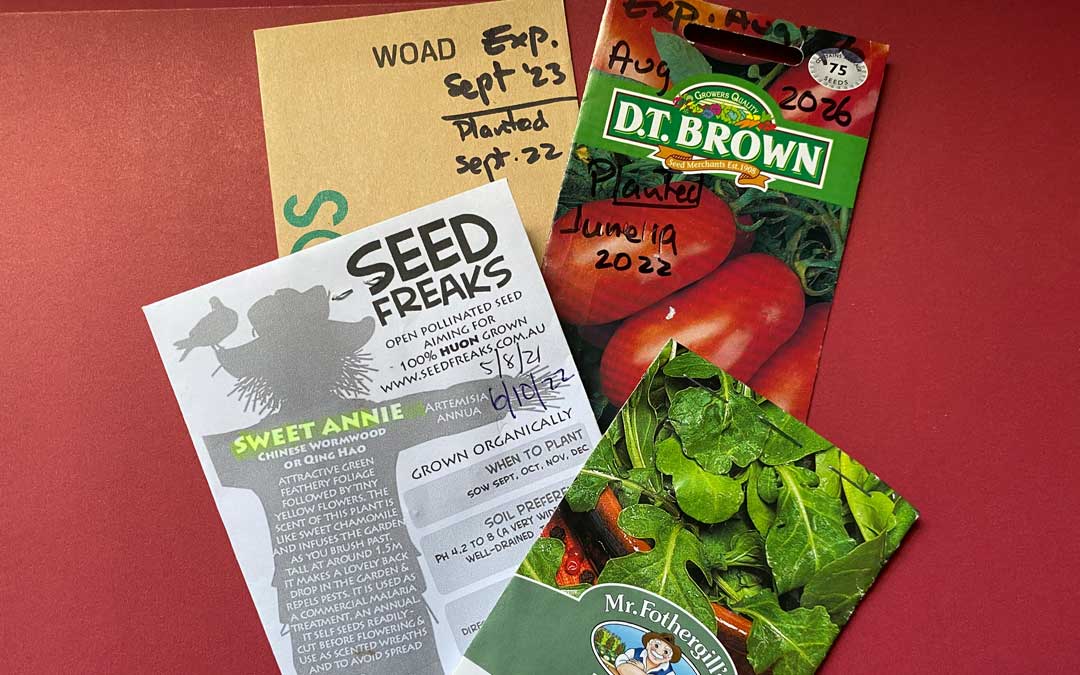 Have you ever planted some seeds, or seedlings you’ve produced yourself, only to wonder later what the variety was or even what you’ve planted? Was it a pumpkin, zucchini, cucumber or squash, for example? Here are some tips to keep track of your plantings and to keep your seed packets in good order.

Whenever I am about to plant seeds, I photograph both sides of the packet before opening. This way I have a record of when I planted the seed, the common and botanical name, the number of seeds in the packet, the instructions, the ‘best by’ or expiry date, and the seed company that produced the seed. If I like the seed, or conversely don’t like it, then I know who to buy from (or not) when I need more. And the same goes for unusual seed or rare seed. Certainly I have my favourite brands. over many years I have found the seed viability much better from some brands than others, but especially with rare seed I cannot always buy it from my preferred brands.

Before I open the packet, I examine it to see where the name of the seed is. If it is at the top, then I cut the bottom open with scissors to preserve the name. If it’s at the bottom, I do the opposite. If there is any information I want that I might be cutting off such as expiry date, I write that further up the packet. When I have taken the seed I want and finished with the packet, I fold over the end that has been cut and staple it. If the seed is loose I double the end over and staple it or transfer the seed to a small plastic zip lock bag which I have kept from previous emptied packets, and do the same.

Each subsequent time I use the seed, I write the date on the packet and this gives me a reference for when I planted that seed.

For seed I collect, I have for years put it in small brown unprinted paper envelopes (sometimes known as pay or brown envelopes) that I was given by one of the op shops. Now that I am about to run out, I’ll buy 300 from Ebay for about $18 (6 cents each). I particularly like these envelopes because they will absorb tiny amounts of moisture unlike ones made from shiny paper. The Banner (Banyule Council’s quarterly news’ publication) is really good paper for seed packets if you want to make your own. If you do, open up a seed packet and use that as a template. When collecting your own seed, write the month and year of collection on the packet as well as any other relevant information.

Seed packets need to be kept in cool, dark, dry conditions so that the seed is kept healthy and viable for the longest period of time possible.