What’s wrong with my zucchini? 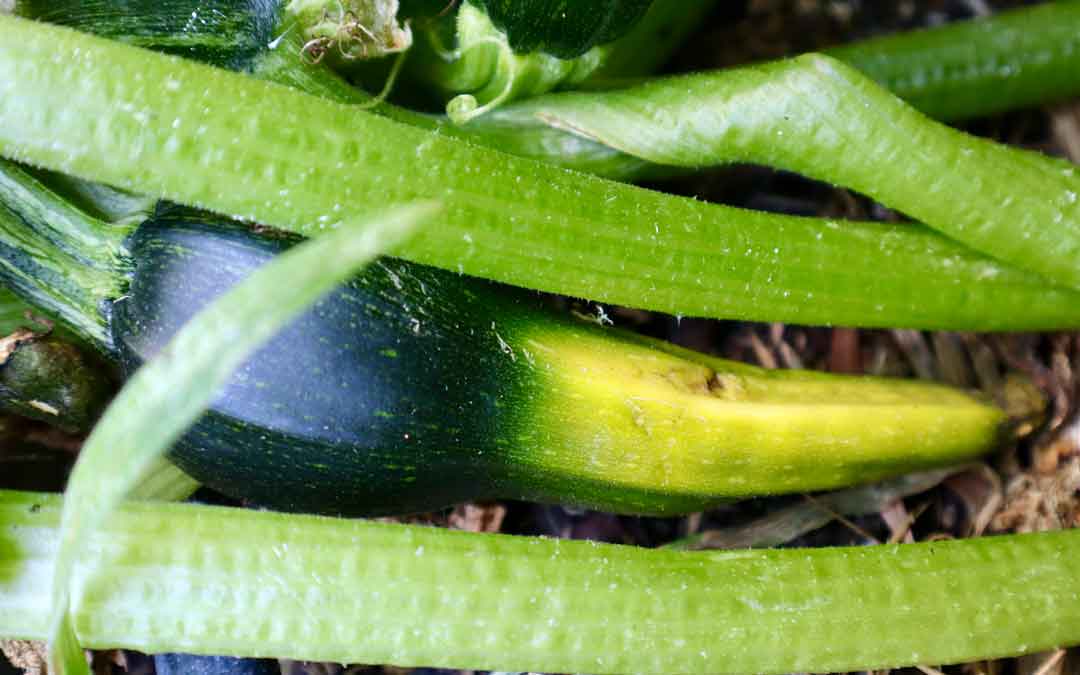 I have always assumed that pollination is a once off event for fruit and vegetables. In other words, I’ve always assumed that a fruit has either been pollinated or it has not. But, from my research, it appears that this is not true for all fruit, including zucchini. Rather, a zucchini requires many pollinations (or pollinators) for it to develop properly. One consequence of this is that you may see both healthy and under-developed fruit on the same plant.

Here are some links to some relevant articles on the Internet. [Editor: some of these articles refer to ‘squash’. ‘Squash’ is an American term which encompasses both pumpkins and zucchini.]

Zucchinis, like pumpkins, have separate female and male flowers and are mostly pollinated by bees. Female zucchini flowers that are visited once or twice only by bees or other pollinators will start to turn yellow part way down the fruit or develop a bulbous end nearest the stem (or both). The end furthest from the stem may also begin to rot.

To complicate things, early in the season zucchini plants develop only male flowers. These are recognisable by their thin stem, while the female flower develops a ‘baby’ immature fruit (really an ovary). These early season male flowers are of no use for pollination so you might as well pick them for stuffed zucchini flower recipes.

Given the risk of no, or inadequate, pollination of your zucchinis by nature, it is good if, once female flowers begin to develop, you can offer some help by hand pollinating the female flowers with the pollen from the males.

Hand pollination is best done in the morning when the flowers are open. They generally close in the afternoon.

There are two ways of hand pollinating. First, and possibly the easiest, is to pick a male flower and pull off the petals so that the anther, which will be covered in yellow pollen, is fully exposed. Then use it as a paint brush, smearing the pollen onto the pistil of the open, female flower. The second way is to simply use a fine paint brush to transfer pollen from the male to the female.

If this is too much trouble, an alternative is to fill your garden with biodiverse plantings. Plant as many flowering plants as you can, especially ones that are attractive to bees. While other pollinators do assist, bees, which can enter quite deeply into throated flowers, are the main pollinators of zucchinis.

Finally, note that zucchini is a cultivar (cultivated variety) of the species Cucurbita pepo. This is the same species as the kumi kumi pumpkin, spaghetti squash, the big, orange, inedible fruit that Americans carve coming up to Halloween and some ornamental gourds.

Note from editor of this article, Guy Palmer:
Since I saw an early draft of Robin’s article, I have been researching the topic as well. Within a typical fruit, there are many seeds and each seed needs to have been pollinated for it to develop. For most flowers, I assume that all the incipient seeds typically get pollinated by the same pollination event but it appears that this is not always the case for plants, such as zucchinis, which have separate female and male flowers. When only some of the incipient seeds within an incipient fruit have been pollinated, the result can apparently be deformed or aborted fruit. This is actually the same phenomenon that I have briefly discussed in my words about when to harvest sweetcorn – see Local Food Connect at: localfoodconnect.org.au.